Your browser does not support the Unity Web Player. Want to save the game for later? Add it to a collection.

Followed the videos to create a 2D space shooter where you have to shoot asteroids to get a high score, be careful, colliding with them will cost you lives. Hide behind the barriers for safety. use your shield wisely and remember to catch the double-shot and health drops.

after completing the basics by following the videos, I created the extra socket to fire from on the player. I then proceeded to create the double-shot drop item, this posed some challenges as I struggled with some of the script. after some research I seemed to get the results that I wanted " the double-shot activates for a set amount of time, coupled with a cool-down time the next double shot will be shorter if picked up less than ten seconds after the last.

Creating random scales and speeds for the asteroids was simple.

The life pickup was simple after succeeding with the double-shot.

The player feedback was also simple as it was very similar to the flashing orb in the previous project.

Creating the solid blocks was also very simple after doing all of the above.

I also added a few extras to make the game a bit more pleasing to the player:

I have completed all of the "on your own assignments".

It was fun, cant wait to get started on the next project. 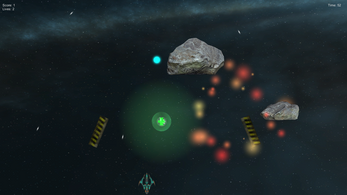